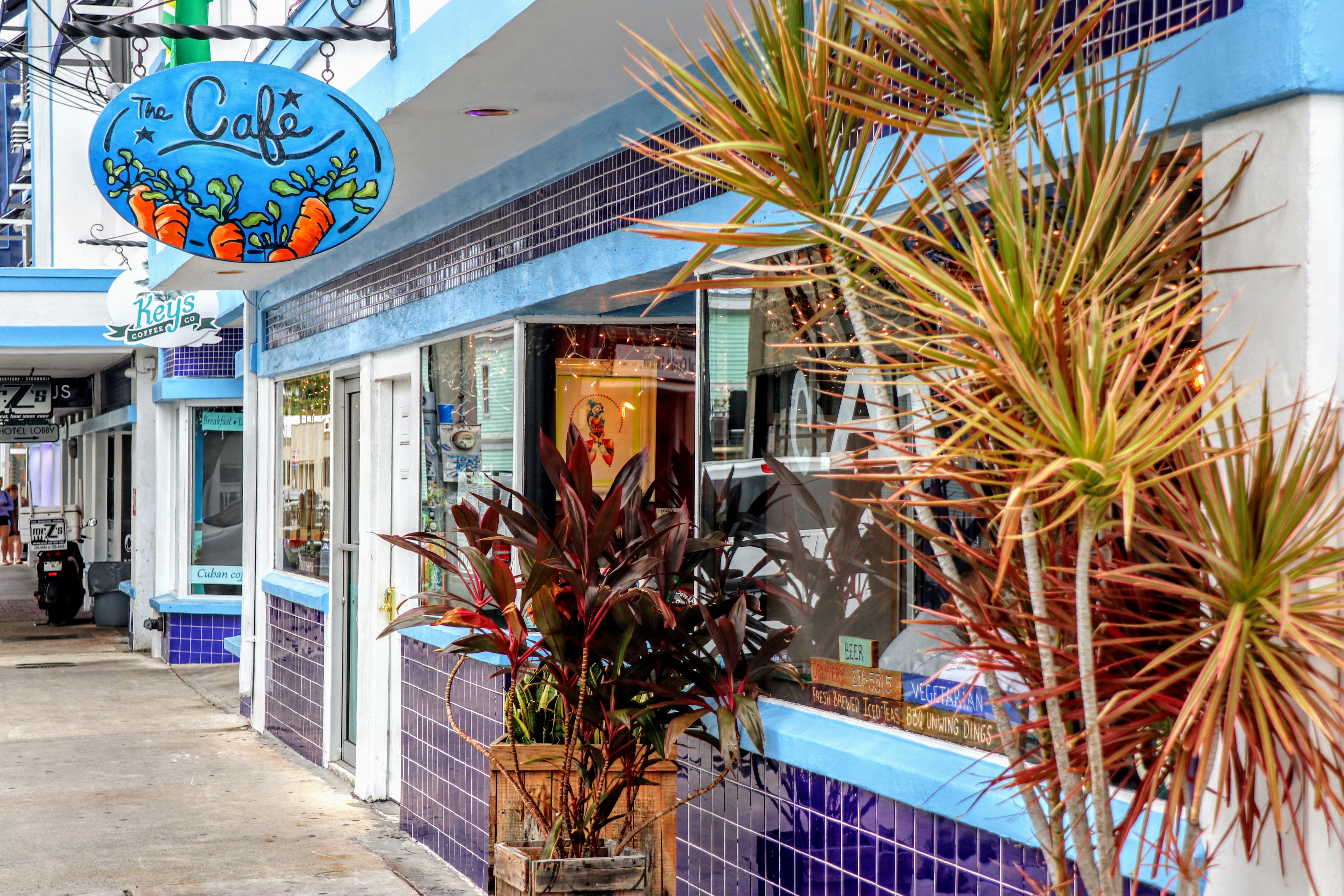 My journey down to Key West, Florida was really about finding the best Key lime pie. However, as a vegetarian married to an avid foodie, exploring exceptional vegetarian and vegan places is always a must. After some online research our food finding adventures landed us at The Cafe, a mostly vegan and vegetarian restaurant on 509 Southard Street. From the colorful funky decor to the eclectic menu, eating here is a total sensory experience!

We arrived during brunch time and as usual I was overwhelmed with choices. There were so many fantastic options! The age old question haunted me: “Should I get breakfast or lunch?” Finally I decided on the Pancho’s Huevos Rancheros and got it vegan style with the scrambled tofu, black beans, corn tortillas, spicy tomato sauce, and avocado. Travis (who annoyingly orders better than me) got the Pepper ‘Steak’ & Swiss vegan sandwich with truffled french fries.

Wow did his sandwich look delicious! They use a housemade seitan with shiitake and portobello mushrooms for their ‘steak’ and top it with grilled onions and peppers. He gave me a bite and I immediately knew we had hit the jack pot. The texture was meaty and the flavors nothing short of fantastic. For the remainder of our meal (and much to Travis’s displeasure), I couldn’t keep my eyes or hands off his food. In fact, it was so good that we came back the next day and shared the same sandwich but instead of using the vegan mozzarella we went with real Swiss cheese (sorry vegans). It was even better the second time around!

Although the food was stellar, I wasn’t thrilled about all the up-charges. It cost $5 to substitute truffled fries for regular fries and $1.25 for the vegan cheese substitute. It’s already a $12 sandwich with no substitutions so if you want a vegan sandwich with truffled fries you end up paying $18.25. Yikes! That’s one expensive sandwich! My suggestion is to just go with the regular vegetarian sandwich and stick with the plain french fries. It’s amazing that way and is worth $12.

Even though I spent most of the meal making longing sideways glances at my husband’s sandwich, my vegan tofu Huevos Rancheros was good. Unfortunately, it’s hard to make a terrific tofu scramble. That’s because tofu requires heavy seasoning or marinating because it naturally is flavorless. That being said, I think the dish was good but would have been tastier with the eggs instead of tofu. As with the sandwich they charged an additional cost ($1.50) to make the dish vegan which made my dish $15.50. Was it good? Yes, but was it $15 good? No, I think it was more like $10 good.

The Cafe also has an entire menu dedicated to their yummy and colorful housemade drinks. We decided to try their watermelon, cucumber lime drink and it was deliciously refreshing! Some of the other drinks that looked great were the limeade with fresh mint and housemade Chai tea. The homemade range from $4-7, but they are amazing!

It’s hard to imagine having room for dessert after eating and drinking so much delectable food. However, even though we were stuffed we couldn’t help drooling over The Cafe’s great selection of vegan deserts such as vegan Key lime cheesecake, vegan carrot cake, vegan double chocolate chip cake, vegan chocolate pudding, vegan red velvet cake, and a vegan blueberry tart. We decided to keep it “Key West” and finally settled on the vegan Key lime cheesecake. At $8/slice I expected that this cake better rock my world! When it arrived I was impressed with the beautiful and creative presentation. The texture wasn’t too thick, the filling was perfectly sweet yet tart, and the sweetness of the mango/raspberry sauce complemented the lime nicely. This cheesecake could compete with a non-vegan one and yes, it rocked my world!

Why You Should Visit The Cafe

Overall I think The Cafe really knocks it out of the park with their vegan and vegetarian food. For example, three out of the four things we ordered (The Pepper ‘Steak’ and Swiss sandwich, Key lime cheesecake and watermelon drink) were visual and tasty show stoppers. Yes, The Cafe is a bit pricey, but with the delicious food and fun artsy atmosphere, it’s a culinary and sensory Key West delight you should experience for yourself!

Quaint, colorful and full of character, the Cinque Terre is one of the most photographed and popular tourist...

The Imm Aim Vegetarian and Bike Cafe was actually not where we intended to go. My husband found a great vegetarian...

After climbing to the top of Skógafoss waterfall

“Be a rainbow in somebody else’s clouds” -Ma

When we finally arrived at the Jökulsárlón glac

Eat your heart out! My red highlights are real🐴

Just a few minutes walk north of the famous Geysir